I cannot believe I am already entering my last week in Machame! This time has flown by. I feel like last week was the first time I really felt established here. I feel very comfortable with the providers and hospital staff and have more sense of my role here. Sadly, I am leaving quite soon after feeling this way. I would love to return here one day!

I was able to be in both the TB and HIV clinics this week. As well, I observed an orthopedics clinic on a day when there were no HIV or TB clinics. The TB clinic contained mostly of exposures and therefore starting preventative therapy. As well, there were a few patients who were follow up visits after being treated for TB. So far, I have not had a confirmed active TB patient, however, today, we sent three HIV positive patients for sputum smears due to complaints of night sweats, cough for two weeks, and weight loss. I was able to speak with Dr. Mushi, the president of the hospital, for a long time in regards to HIV in this area. He explained that although this is a Lutheran community, there is a large amount of infidelity that occurs. His wife just returned from the USA after receiving her Masters in Public Health degree and he himself has spent a large amount of time in America so he is able to compare and contrast cultures quite easily. He explained that in America, if a boyfriend or girlfriend is unfaithful, most people will break off the relationship. In Tanzania, this is not the case. He explained that when a partner is unfaithful in the relationship, they typically fight for two days but then resume a sexual relationship again and neither person gets tested because they don’t necessarily want to know if the other has infected them with HIV. Therefore, there are many people who are not diagnosed that continue to infect others in the community. As well, there is prostitution that occurs for money for food in this area. Many times husbands will work in town or far away and won’t send all the money back to the wife to support them and their children. The mother may not make enough money at market selling her crops she grows on their small property and therefore will resort to prostituting herself to pay for food as well as the children’s school fees. I asked him about drug use and he said there is some IV drug use such as heroin but it is not as much of a problem as it is in Dar es Salaam or Moshi. As well, MSM is not as common in this small mountain town. So truly, majority of HIV is contracted via heterosexual sex here in Machame. We also discussed the medications because the majority of their first line medications are not used anymore in America. Unfortunately, due to patent laws, the companies in India that make the cheaper HIV drugs cannot make the newer drugs until the patents are up and the newer drugs are too expensive to purchase from the current drug companies. I have seen many patients that have immunologic or virologic failure despite medication adherence which may be attributed to the lower barrier to resistance of some of these older medications. 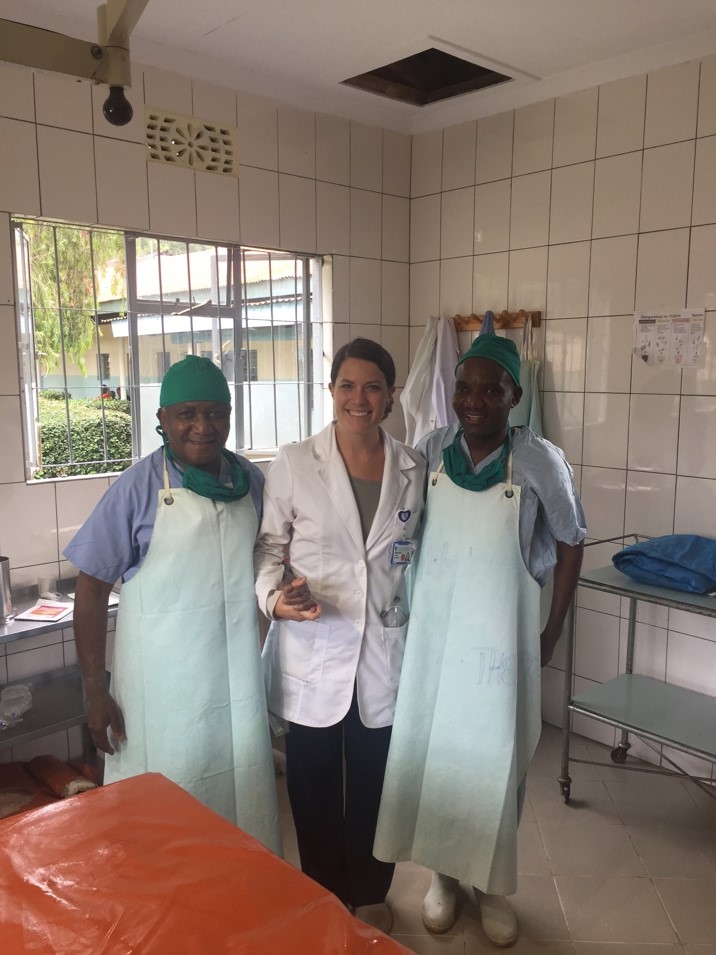 Even though it is not related to my program of study, one of the most interesting days was when I was able to observe both the orthopedics clinic and operations. Dr. Lymo is a Tanzanian orthopedic surgeon that has trained both in Uganda (there were no medical schools in Tanzania at the time he went through med school), England and America. He is about 71 years old and is amazing at what he does. He operates Monday, Tuesday, Wednesday and Friday and has clinic on Thursday. He is one of the most humble men I’ve ever met and absolutely loves what he does. On Thursday, we were able to see 75 patients; we started at 9am and did not finish until 5pm with no breaks or lunch. One of the nurses brought us snacks to eat while we saw patients. Machame hospital is most known for its orthopedics program because of the fundraising from Bob and the work of Dr. Lymo. In fact, people will come from Kenya and the major cities of Tanzania up to this small mountain hospital in order to have work done by Dr. Lymo. I was able to observe him in the minor theater (they call the operation rooms theaters here). One woman had her leg amputated below the knee after a horrible motorcycle accident. Unfortunately, her husband died on site due to the impact. The patient had been taken to a local health center where she sat for 2 weeks with an open fracture before being treated with antibiotics. After being transferred to Machame, Dr. Lymo and his team attempted treat the infection, however, it had already gotten into her bone. Therefore, it needed to be amputated. Dr. Lymo went to the ward to retrieve her, helped lift her onto the table and prayed with her before surgery. Most surgeons in America enter the operating room only after the patient has been prepped, sterile instruments are set up and all nurses are in place; they get in and get out. Dr. Lymo will prep the patients, help prep the sterile instruments, and even mop the floor in between procedures. He never appears to be busy and stressed for time. He joked with the patient and made her laugh. As well, during the procedure (she was awake and had just a spinal block), he would periodically peer over the curtain shielding her face from seeing the surgery to talk with her, or tell her a joke. I was so thankful I was able to witness this type of caring for patients. He performed 9 different operations that day.

My next update will sadly be my last. In between now and then, I will hopefully have summitted Mt. Kilimanjaro! I will get off the mountain next Wednesday and spend my last night here in Machame before I leave on Thursday.