Creating a Culture of Inclusivity, Understanding and Support 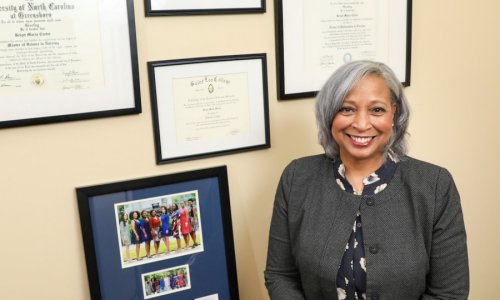 At Duke University School of Nursing (DUSON), we are deeply committed to fostering diversity in the classroom and beyond. As we celebrate Black History Month, we’d like to show how we’re creating a culture of inclusivity, understanding and support for individuals of all backgrounds.

Though it’s been nearly a decade, Brigit Carter, PhD, MSN, RN, CCRN, associate dean for diversity and inclusion, and associate professor; remembers well her first days as a faculty member at Duke University School of Nursing. “I was so new. I was an assistant professor and I had never taught in the academic setting before,” she said. But instead of feeling lost and alone, Carter said she felt an immediate connection. “I had people who reached out to me, who said, ‘you can do this,’ they made me feel like I was part of the community, they gave me a great deal of mentorship and support.”

Today, Carter wants that feeling to be one shared by all in DUSON. “To me, the experience I had should be the same for everyone. It shouldn’t be a single experience by a single person. This should be a repeated occurrence for every individual who is a member of the DUSON family. They should always feel like they’re being developed and strengthened and primed for whatever might come next in their professional, academic, research or clinical journey.”

The former director of the Accelerated Bachelor of Science in Nursing (ABSN) program, Carter assumed the position of DUSON’s first-ever associate dean for Diversity and Inclusion on July 1, 2018. Carter says the support she has received at DUSON Helped her to expand her role, eventually becoming the academic coordinator for the Health Equity Academy (HEA), one of DUSON’s many programs that focuses on creating a culture of diversity and inclusion. Her work in that area will continue in her new position.

For Carter, the definition of diversity and inclusion is embracing every person that joins the DUSON team – regardless of whatever the seen or unseen differences may be and ensuring they feel supported, heard and respected. “We are building a place that radiates a sense of belonging and our colleagues are confident this is a place where they can explore all components of diversity and inclusivity.”

The foundation for this vision is already set. For more than a decade, DUSON has promoted diversity and inclusion in the classroom and in the community. Creating the associate dean’s position is a way to bring the efforts of the entire school under one office, Carter said, and to deepen the understanding of those efforts and their effects on the school and to the profession of nursing in general. As associate dean, she will build upon and expand the School’s existing diversity efforts, while helping to create new understanding and progress in this important mission area. “Our doors are open and are a safe place for any member of the DUSON community,” Carter said.

The Bridge to Doctorate program, a grant-funded collaborative effort with Winston-Salem State University started in 2012, is another effort by DUSON to promote diversity by providing minority nursing students a way to transition to the PhD program at DUSON. Increasing the numbers of minority nurse scientists and researchers helps create diversity of thought at higher levels of research and instruction.

Historically, programs such as HEA and the Bridge to Doctorate have worked toward increasing numbers of underrepresented minorities at DUSON. The HEA started in 2009, supported by a Health Resources and Services Administration (HRSA) Nursing Workforce Diversity grant. The program offers support for incoming ABSN students not only in the form of scholarships, but also social and academic support. A six-week long immersion program the summer before the first year of the ABSN program helps students get to know faculty and become comfortable at Duke.

“The literature shows that students who are minorities have issues with a sense of belonging,” Carter said, noting that it’s not just as simple as bringing underrepresented minorities to campus. Once they are here, they must be nurtured. The summer immersion program tackles that obstacle, striving to make sure minority students are embraced and made to feel seen and valued like Carter herself was.

To successfully create a culture of inclusion, the community at large needs to understand what that means. Offerings like the Racial Equity Institute (REI) training, which more than half the DUSON community has participated in to date, strives to bring implicit bias and other issues to the forefront. The two-day training workshop, offered at DUSON multiple times since 2015, focuses on the impact of race and how it affects institutions. Carter said education like this is critical, but she wants to take it to the next step. Evaluation of the programs and training offered at DUSON is something she says is important to expanding efforts of diversity and inclusion. “Was it helpful and why? What type of knowledge did it give you?” she imagines asking.

Programs like these focus mostly on minorities of color, which is an important part of having a diverse culture. But at DUSON, diversity is defined as going beyond just race and ethnicity. Encouraging and supporting diversity of gender and gender-identity, and differing belief systems, religious and otherwise, are just as important as creating an inclusive environment for faculty, staff and students of color, Carter said.

DUSON works to support men and LGBTQ students who are pursuing careers in a predominantly white, female profession by providing workshops, seminars, global initiatives and access to student organizations such as SPECTRUM, the gay-straight alliance; Fusion, a multi-cultural student group focused on supporting diversity; and the Duke Chapter of the American Assembly of Men in Nursing (AAMN). DUSON has been recognized by the AAMN as a Best Nursing School for Men in 2016, 2017 and most recently for 2018.

Carter points out that it is important to expand our thoughts around diversity and inclusion and to move beyond obvious characteristics. “While some minority groups might be more difficult to identify at first glance, it’s important that their voices are equally heard and respected, she added: “It’s not just about black and white, it’s about every part of the world we live in.”

DUSON’s culture of diversity extends to faculty and staff as well as students. Teaching students how to interact with colleagues and patients can only be accomplished if the faculty is inclusive and representative as well. When hiring faculty, DUSON works with Duke’s Office for Institutional Equity, training the search committee to recognize implicit biases.

“I don’t think people realize, when you look at a resume, what components you pull out immediately that can bias you against, or for, someone,” Carter said. “Every faculty member should be supporting diversity and inclusion. We all have to learn to have conversations that may be more challenging than we’re used to. And we need to know how to have those discussions in a way that is constructive and does not demean anyone.”

While proven to be beneficial, embracing diversity also comes with challenges. A health care workforce that looks like the population its treating can help create more trust between patients and caregivers. But interacting with people who look, act and believe differently can also be uncomfortable for those who aren’t used to it. For example, a patient might refuse care from a diverse provider, so it is critical to teach students how to deal with those situations, should they arise.

“Some of our students have had some very real issues that we have to deal with and provide them with some strategies for handling those situations,” Carter said. Offering dedicated instruction for how students and clinical instructors deal with these types of conflicts is one idea Carter wants to pursue. Deciding how to use the resources provided for her mission most efficiently is another challenge of her new role. “We need to be very focused moving forward so the work we do is meaningful to everyone in our community,” she said. ‘Carter has planned “listening tours” for students, faculty and staff to talk about what works in diversity and inclusion, what doesn’t work, and how to improve interactions within the DUSON community. Listening tours coupled with surveys focusing on the climate at the School are two ways Carter hopes to get input and feedback from the nursing community.

She will also continue to collaborate with the School of Medicine and the Physical Therapy and Physician Assistant programs at Duke, creating an advisory board at DUSON with members from each area to expand the goal of diversity beyond the nursing school.

Continuing and growing DUSON’s commitment to diversity of thought, experience and culture remains central to its overall pursuit of excellence. “In order to grow, we have to be exposed to so many different things,” Carter said. “We can’t get that without diversity. Exposure to diverse ideas and experiences are what makes us expand beyond things we never imagined for ourselves.”