You may know the facts already: Donna Allen Harris became the first African-American to graduate from Duke University School of Nursing in 1971. But do you know the full story of the woman and her experience breaking the color barrier?

To begin with, she had done this before. Before entering DUSON, Harris had been through an earlier trial by fire as one of the first black students to attend her previously segregated high school in Elizabeth City, North Carolina. Her memories remain vivid: “I remember…people running out of the bathroom, holding noses, turning desks around when I walked into the room – it was pretty overt for a long time,” she told Jessica Roseberry of Duke’s Medical Center Archives. She endured because her family and community supported her.

When it came time for nursing school, though, Harris longed for a setting where she wouldn’t need to be the first or the only again. She applied to Fisk University, a well-known HBCU with an excellent nursing program. But a high school counselor, hearing that Duke was actively looking for African-American applicants, encouraged her to apply there. “I just did it because of the pressure, not expecting to hear anything,” Harris recalled.

When she did hear back from Duke, the news forced a change in her plans. Not only had they accepted her – they were offering a four-year full scholarship. “That was hard for the adults to let me turn my back on,” said Harris. “But I didn’t want to do it. All I could envision was more of the same, and I didn’t want to go through that type of environment and experience again.” Still, when Fisk couldn’t match Duke’s offer, Harris made her peace with being a pioneer one more time.

Harris arrived in Durham in the fall of 1967, ready to work but unsure what to expect. This time around, there was no one protesting her enrollment, but subtler forms of prejudice soon appeared. On one 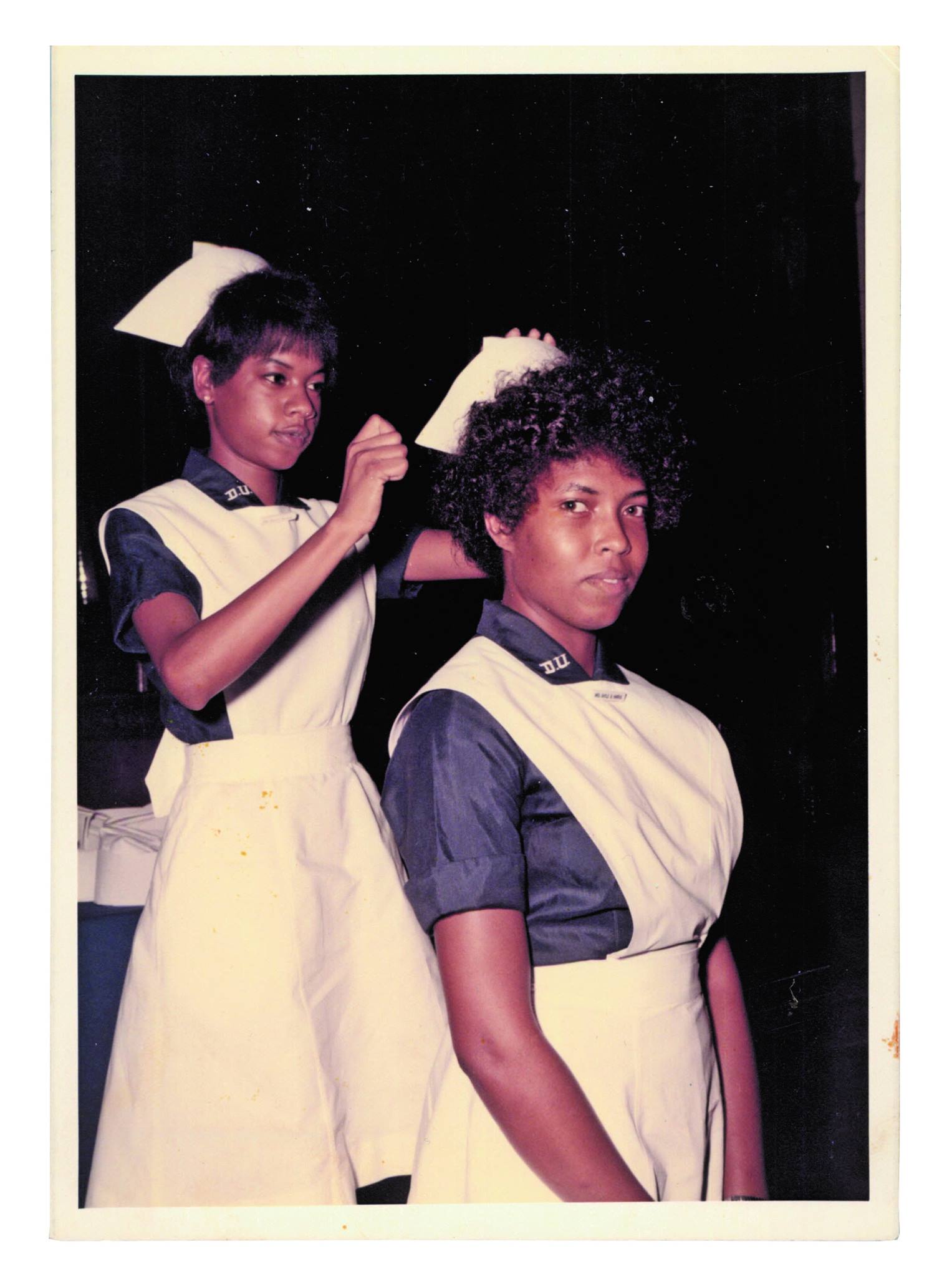 early paper, she was describing the appearance of a clinic patient. “I remember writing ‘dark skin,’ and that being circled and me being asked, ‘Do you have problems with your race?’ And I just thought, not again.” This experience made her wary of trusting her professors, and she determined to look elsewhere for support.

“The thing that I think saved me,” Harris recalled, “was the friendships that I established with the students in Hanes House. For the most part, they were from the North and West, not so much from the South. The social aspect of it was so different from high school, and that was my solace.” These white friends and study partners made her experience at the school bearable, and also encouraged a less-talked-about breakthrough: in her first year, she became the first black student to pledge a sorority at Duke.

With her Duke Nursing BSN degree, Harris has gone on to a rich and varied career. “I’ve done hospital nursing, public health nursing, I’ve done office nursing, I’ve done school nursing, now I’m in nursing research,” she said. She married a man she met at Duke, and raised a family. And in an unexpected twist, she returned to Duke as a researcher in 2006, bringing her journey full circle.

But beyond her personal achievements, Donna Allen Harris is most proud of how she paved the way for others. After her momentous first step, many more African-American students were free to follow her; the year after she started, for example, saw the arrival of Gayle Bridges Harris, who would go on to a long and distinguished career leading Durham’s Department of Public Health. “It really was a significant accomplishment, and it did open the doors for a lot of others who have accomplished a lot of things,” Harris noted. “I’m in that group where people stood on my shoulders and went further, and that’s really a privilege. I might smile a little bit more when people say, ‘I heard you were the first.’”