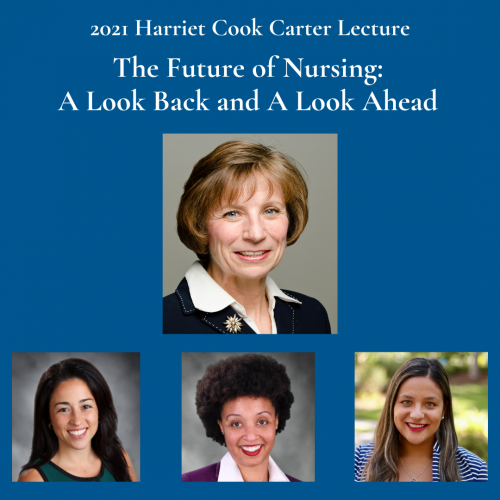 More than 220 attendants within and outside the Duke University School of Nursing logged onto Zoom on February 2 to hear more about “The Future of Nursing: A Look Back and A Look Ahead,” when the School presented its 58th annual Harriet Cook Carter Lecture.

This year's featured speaker was Susan B. Hassmiller, senior adviser for Nursing for the Robert Wood Johnson Foundation and director of the Foundation's Future of Nursing: Campaign for Action, in partnership with AARP. Her presentation preceded a three-person panel discussion.

Hassmiller spoke about the impact of the first “Future of Nursing: Leading Change, Advancing Health,” released in 2010 through a partnership between the Robert Wood Johnson Foundation and the Institute of Medicine (now the National Academy of Medicine). She also revealed more information about the upcoming “The Future of Nursing 2020-2030,” to be released this spring.

Since the release of the first report, more nurses now hold at least a BSN, and more states have expanded access to high quality health care, according to Hassmiller. While diversity in the workforce has improved, Hassmiller did reiterate more work needs to be done toward this effort.

Nurses are in an advantageous position to address health equity, according to Hassmiller, because nurses constitute the largest segment of health care professionals, are viewed as “the most trusted profession,” are often the first ones to interact with a patient in a care setting, and are trained and educated to take a holistic approach to health care.

She also laid out a case for why more nurses should exercise their leadership capabilities and get involved in decision making regarding policies and other matters.

“This is a continuation of the work you were meant to do and have always done,” Hassmiller said. “Your vocation as a nurse has prepared you for your leadership, and the country needs you to lead now.”

“We have spent the past decade building the capacity of the nursing workforce by implementing the recommendations of this landmark report,” she said. “Now that we have that capacity built, let’s put it to some great use.

What our world needs now is for nurses to be involved in doing more to achieve health equity. We must be all in.”

After a question-and-answer segment with Hassmiller, the panel discussion commenced.

First was Rosa Gonzalez-Guarda, PhD, MPH, RN, CPH, FAAN, associate professor who participated in the first “Future of Nursing” report. Before she delved into her segment, Gonzalez-Guarda shared that she viewed Hassmiller as a “role model,” as the two worked together early on in Gonzalez-Guarda’s career as a nurse faculty scholar, right after she was hired to her first faculty position. 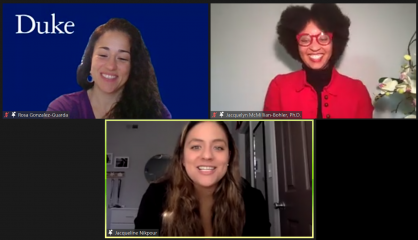 Gonzalez-Guarda connected her talk to the event’s central theme through three primary points: 1. How diversity, equity and inclusion need to be a primary lens in health not merely an afterthought; 2. How to balance and leverage the trust nurses have; and 3. How important the idea of nurses being political is and how more political involvement could impact advancing population health

Jacquelyn M McMillian-Bohler, PhD, MSN, BSN, CNM, CNE, assistant professor, was second and discussed how diversity and inclusion in faculty is important to the future of nursing.

Jacqueline Nikpour, PhD student and Robert Wood Johnson Future of Nursing Scholar, provided the student’s perspective on this central topic based off her own experiences.

The panelists concluded the event by answering questions from the audience.

“Nursing field stands ready to advance health equity,” Hassmiller said. “More nurses stand to take on leadership roles than ever before. It is time for nurses to create a better world.”

A full recording of the event is now available for your viewing.