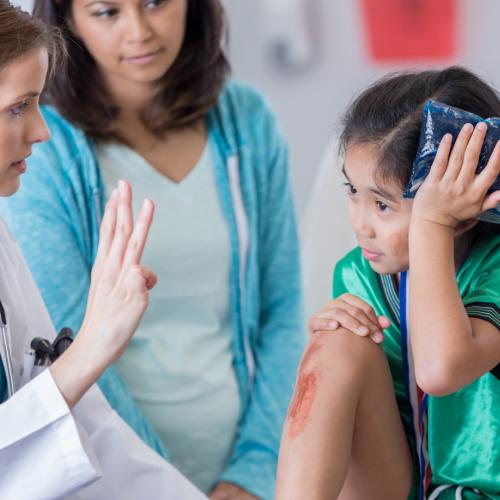 It’s common for kids to injure themselves while playing—a fall off a bike, scooter or wagon, an errant toy to the head or even a bodily collision with a friend. In most cases, the injury is minor, but Karin Reuter-Rice, PhD, MSN, BSN, associate professor, suspects that many times—more than commonly believed—children actually sustain concussions during these ordinary events. With mild concussions, just as with the more obvious moderate and severe ones—all defined as traumatic brain injuries (TBIs)—there is a change in brain function, which demands observation, therapy, and follow-up to achieve full recovery.

“Pretty much at any age, a child can sustain a concussion,” Reuter-Rice says, noting that children up until the age of 4 have the highest rate of brain injury. Young children are often carried, or learning to walk, so drops and falls are prevalent. Older children, ages 15 to early 20s, often sustain TBIs from car collisions or sports-related injuries. Most of the focus on childhood concussion has been on high school and collegiate athletes, Reuter-Rice says. “But I think we under appreciate that everyday life for children puts them at risk for concussion.”

As a nurse scientist at Duke, Reuter-Rice has conducted research on pediatric TBIs, focusing on understanding what happens after the injury from a physiologic perspective and how those patients fare over the long term. She is currently researching mild TBIs and their outcomes, trying to determine whether there are unique symptoms that may have some biologic underpinnings. Reuter-Rice also chairs the Children and Youth Committee of the North Carolina Brain Injury Advisory Council, a 15-member multidisciplinary group which develops initiatives, including education and outreach, to reduce the risk of brain injury.

“Just hitting your head doesn’t mean you have a concussion,” Reuter-Rice says, but it’s important for caregivers to be watchful after a known event, however minor, for signs that could indicate trauma. Loss of consciousness is an obvious red flag, but things like a child being tired, glassy-eyed, sluggish, off-balance, nauseous, sensitive to light or even slightly forgetful can be indicators of a TBI. Subtle changes should not be dismissed, Reuter-Rice says, but rather a consult should be made with a caregiver with concussion training, such as a school nurse, athletic trainer or primary care provider.

Because of vague or delayed symptoms, a child may not receive medical attention until several days after the event, when a teacher or parent might notice a slight change in the child. As chair of the advisory council, Reuter-Rice helped develop and disseminate to North Carolina schools more than 100,000 brochures to parents and caregivers that explain the NC Board of Education’s return-to-learn policy, enacted in 2016. Making sure all students not just athletes—who are suspected of suffering even a mild concussion receive care and observation in the days and weeks following the injury, and that necessary adjustments are made to a child’s learning are keys to mitigating long-term effects of TBIs. The return-to-learn policy provides to all North Carolina students what the Gfellar-Waller Concussion Awareness Act of 2011 did for student athletes: a strict protocol outlining concussion awareness and when students are allowed to resume an activity.

“We’ve always thought that most children, once they’ve had a concussion, they’re better in a week or two,” Reuter-Rice says. “But what we’re coming to find out is that may not be completely accurate.” Her research has found there are some children who continue to have symptoms well past the expected time period. “It’s those children I’m interested in because if we had a better way to assess that they were going to have symptoms for a longer period of time, we could start their therapies much sooner.”

Students who don’t know they’ve experienced a concussion, or if that information hasn’t been communicated to the school, are expected to perform as usual. If they are fatigued, irate or forgetful, or can’t seem to focus, they may fall behind in school or even be punished for their assumed lack of diligence. “A child with a concussion, they don’t look different,” Reuter-Rice says. “With this type of invisible injury, people don’t adjust for it.”

Concussion therapy includes limits on physical activity, decreased exposure to light and noise, and restrictions on screen usage. Cognitive therapy follows a child’s processing functions after an injury, helping to reengage systems that may have faltered. For injured children who have not been identified, normal daily stimulation can worsen or lengthen the symptoms, causing possible learning barriers, behavioral problems and slowed social and even physical development, if balance becomes an issue. Reuter-Rice’s research considers that there are biochemical changes that can impact the brain in some cases, making diagnosis and care even more critical. Without proper therapy, students can fall behind as executive function—higher levels of learning and remembering—can suffer. This phenomenon becomes more pronounced the less access to care a child might have.

“Many children who don’t have high access to care often go undiagnosed and then also go without any kind of therapy to help them heal,” Reuter-Rice says, “so they’re missing school, they’re missing activities.” This means poorer health outcomes downstream. Raising awareness that concussion is a brain injury that requires therapy helps empower families and individuals to seek they help they need.

“We need to work together as a community to make sure that the child receives therapy,” Reuter-Rice says. Children with untreated TBIs can have higher rates of depression and suicide and struggle with relationships, including employment relationships, leading to eventual economic instability.  “It impacts their ability to learn and play and develop.”

Reuter-Rice says she hopes her research and work with the advisory council will bring into the spotlight children with brain injuries who are not athletes, and raise awareness that they may not have the same opportunity to be evaluated and provided therapies. She wants that to change.

“There are many children who very quickly heal from having a concussion. However, without an evaluation and without following these kids and providing them with better health resources, I’m not sure we can make that blanket statement that they will all get better.”

The Duke University School of Nursing is committed to achieving the goals in our strategic plan.  This story supports our Research focus area.