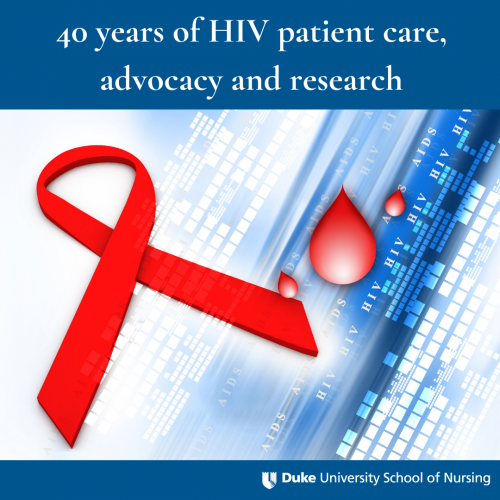 Though substantial progress in research and treatment has been made throughout the 40 years since the onset of the AIDS epidemic, there is much left to explore about HIV and AIDS and its impact on individuals and communities. That is why several Duke University School of Nursing researchers have dedicated time and resources into further understanding HIV and how different populations are affected by it.

A brief overview of this research was captured in the May/June issue of the “Journal of the Association of Nurses in AIDS Care” (JANAC), the Association of Nurses in AIDS Care’s official journal. This issue coincides with the 40th commemoration of the June 5, 1981, report of five gay men in Los Angeles with a rare form of pneumonia published in the Center for Disease Control and Prevention’s “Mortality and Morbidity Weekly Report” (MMWR). The JANAC special issue focuses on nursing science’s role throughout the epidemic. Michael V. Relf, PhD, RN, AACRN, ANEF, FAAN, associate dean for Global and Community Health Affairs and associate professor, is the editor-in-chief of JANAC and a contributor to the introductory editorial that summarizes the issue’s contents.

“Throughout the HIV epidemic, nurses and midwives around the world have been at the front line of providing compassionate, holistic, personal and community-centered prevention, care and treatment,” Relf said.

Researchers have observed that HIV still carries a stigma in addition to disproportionately affecting certain demographics.

Marta Mulawa, PhD, MHS, assistant professor, serves as a Duke sub-contract PI on a R01-funded project to support an app-based intervention that promotes user-generated content and social support in order to reduce intersectional stigma and improve HIV-related outcomes among young Black and Latino men and transgender women who have sex with men.

Jiepin Cao, PhD student, Jacqueline Nikpour, PhD'21, and Schenita D. Randolph, PhD, MPH, RN, CNE, assistant professor, contributed a paper to the JANAC special issue examining challenges that face cisgender women in the HIV status neutral care continuum. Mulawa was part of a project that sought whether or not social networks among women who inject drugs could be leveraged to increase awareness about pre-exposure prophylaxis (PrEP), a medicine that would prevent people at high risk for HIV from acquiring the virus.

Randolph and Ragan Johnson, DNP, MSN, APRN-BC, assistant professor, took a different approach to raise awareness of PrEP in their demographic of Black women in the southern U.S., a population that’s particularly at high risk. The two research partners and their team are using beauty salons to conduct multi-level interventions with the desired outcome to increase usage of PrEP within this demographic. Randolph has also delved into how perceived structural racism and discrimination in addition to medical mistrust in the health care system have influenced Black women in the U.S. South’s hesitation of engaging in HIV health services, as well as spoke on the necessity of addressing HIV as it pertains to racial discrimination for the School’s Research Seminar Series on May 17 and for University of North Carolina at Chapel Hill GlobeMed’s annual red-tie event in March.

In the earlier days of the COVID-19 pandemic, Randolph, Relf and Kara McGee, DMS, MSPH, PA-C, AAHIVS, associate professor, were among researchers who observed parallels between how people from Black, Indigenous, and Communities of Color have been affected by COVID-19 more acutely than White individuals as is the case with the HIV epidemic. Relf further reflected upon the similarities between the COVID-19 pandemic and the HIV epidemic in a separate editorial published last year. McGee serves as the lead faculty for the School’s HIV Specialty.

Students in the HIV Specialty learn how they can help alleviate the stigma surrounding HIV by providing and advocating for compassionate patient care of the people who live with the virus. How stigma prevents optimal HIV prevention, care and treatment is discussed further in an article co-written by Relf, Lauren Holt, PhD student, and Courtney Caiola, PhD’15.

The School’s incoming dean, Vincent Guilamo-Ramos, PhD, MPH, LCSW, RN, ANP-BC, PMHNP-BC, AAHIVS, FAAN, earned a HIV specialty certification along with his MSN in Adult-Gerontology Nurse Practitioner – Primary Care. Today, he is considered a national leader in advancing adolescent sexual reproductive health policy, practice, and science and is a member of the Presidential Advisory Council on HIV and AIDS.

In April Ramos participated in the 2021 National Latinx Conference on HIV, hepatitis C and substance use disorder, a conference aimed at providing health care and social service providers with innovative concepts, best practices and new information on how to better serve the Latinx communities.

In 2019, it was estimated that about 38 million people around the world live with HIV/AIDS. The highest amount of HIV cases can be found in the regions of East and South Africa, which is where majority of the School’s global HIV research efforts are centered. Mulawa is customizing HealthMpowerment, a theory-based, smartphone app-delivered intervention, to improve antiretroviral therapy adherence among adolescents living with HIV in Cape Town, South Africa, a Duke Global Health Institute (DGHI) priority location. To help those with HIV in Tanzania, Brandon Knettel, PhD, assistant professor, helped to develop Maisha, a video-assisted counseling intervention to address HIV stigma at entry into antenatal care, and will launch a telehealth counseling intervention aimed at reducing suicidality and improving HIV care engagement. Relf is conducting research in Rwanda and Tanzania to develop a linguistically sensitive and culturally relevant stigma intervention for women living with HIV. Knettel, Relf, Holt, Amnazo Muhirwa, PhD student, and Julia Na, ABSN’20, presented additional research being done in Tanzania and Rwanda at the Center for AIDS Research of Duke University’s 16th Annual Fall Scientific Retreat in September 2020.

Taking a broader overview, Ramos, Randolph and Dennis Flores, PhD’16, contributed to an article that analyzes how nursing contributions overall are helping globally end HIV in the adolescent and young adult age groups.

Having HIV was once widely considered fatal, but, due to advances in diagnosis and treatment, it is now viewed as living with a manageable chronic health problem. Though this is the case, researchers at the School will continue to assess and dissect the virus’s nuisances, while faculty in the HIV Specialty will continue to prepare students to enter this sector of the nursing workforce in order to provide the best comprehensive, patient-centered HIV primary care.